Countless clues and paths to ancient stories, ideals, mythologies and beliefs lie hidden throughout the endless ‘art’ in the form of symbolism, suggestion and design.  For example, red ivy on a zigzag trail symbolizes a direct connection with chapter nine of the Ise Mongatori, an ancient tale a wonderer.  To eyes unaware of the literary connection the ‘Art’ can be appreciated for its masterful aesthetics and the obvious patience and tranquility associated with the stroke of the Artist’s brush stroke, but to those who can look into the soul of the ‘art’ you’ll not only realize the connection to deeper stories, you’ll gaze into a ghost world of past ideals, literature, mannerism and morality which is as vast and as complex as our own living existence.  In this realm of viewing art, the viewers knowledge of Japanese History in all its genres are crucial to understanding Art the way it was meant to be seen by the Artist.

This paper will focus on a Japanese Kamakurabori Tsuba decorated with imagery of a pagoda, overlapping rings, a fluid/cloud like object and a figure at the top known as a genji-mon.  This particular genji-mon specifically addresses chapter 33 in Lady Murasaki Shikibu’s Tale of Genji.  Before I elaborate on the symbolism behind this I will quickly identify the tsuba and genji-mon.

A Tsuba is a mounted ‘guard’ on a Japanese sword.  It’s primary purpose is “to keep the user's hand from sliding up onto the blade of the sword, to counterbalance the weight of the blade, to communicate the social standing, beliefs and tastes of its owner, and, to some degree, to protect the hand from an opponent's blade. Its role as a hand guard is undermined by its role as a counter weight, due to the fact that the protection offered by the tsuba from an opponent’s blade is minimal and should not be depended upon as a typical method of defense.  This particular tsuba is a Kamakurabori Tsuba from the late Muromachi period named after the carved lacquer and woodcraft of the city of .  The “samurai saw the tsuba his own ideal of taste and reserve.”  This is especially important when linking the possible

connection between the sword’s owner and his appreciation of The Tale of Genji. 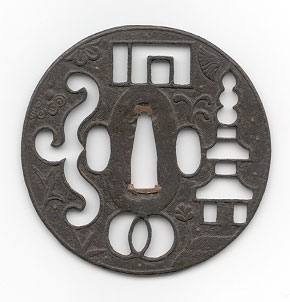 “Genji crests ('Genji-mon') are 54 different rectilinear emblems, each associated with one of the 54 chapters of the 'Genji monogatari' ("Tale of Genji," early eleventh century, written by Murasaki Shikibu)…Genji crests also called 'Genji-kô' ("Genji incense"), were apparently first derived from one of the traditional incense ceremonies [Kodo] in which participants burned combinations of 5 primary scents from 25 [later expanded to 54 to correspond with the Genji chapters] different packets, each marked with a unique symbol. (Note that each of the 54 'Genji-mon' are composed of 5 primary vertical stems with different arrangements of one or more upper horizontal cross bars).”

The Significance of the Combination

You maybe asking yourself, “okay there’s the genji-mon that seems to have something to do with incense, and there’s the tsuba which is part of sword…now what’s the point?”

In the days of the Samurai lifestyle and mannerism were dictated my social status.  For example, the way a samurai dressed was very much dictated by tradition…there is not in any research I’ve done any significant evolution of samurai dress code, no new trendy masks or armor.  Long story short, there were no casual Fridays were a Shogun could wake up and handle his business wearing silk pants and a t-shirt.  The same could be said about any social class; no matter where you were in societies social hierarchy, your life was dictated by a strong set of standards ranging from who you can meet to where you were buried.

Earlier I quoted Dr. Torigoye, stating, “samurai saw the tsuba as his own ideal of taste and reserve.”  In a collectivistic society such as this, the desire for individualism probably didn’t even exist, as we know it today.  Instead warriors may have expressed this idea in the form of embellishing a family insignia or other symbolic decoration on their armor, swords or clothing.  This is in fact the case when it comes to this particular tsuba.

I imagine the owner of this tsuba to relate strongly to the ideals embedded with this genji-mon.  To properly understand these ideals, I will quickly summarize the 33rd chapter of the Genji tales to which this emblem implies.

Chapter 33 tells the tale of a sickly Suzaku emperor whose time of death is visible on the horizons.  He has a daughter known as The Third Princess, who without her father would face financial misery without a proper husband.  This situation causes the emperor to reach out to Genji.  The Emperor knows that Genji is known to be a womanizer, but overlooks this because Genji also has the reputation to take care of the women in his life. Now a samurai who wears a crest referencing this emblem probably feels an overwhelming connection to the chapters underlying theme of paternal responsibility.  Now lets look past the term ‘paternal’ and focus on the underlying principles that this envelops.  For instance the desire to conduct one’s mannerism so that an example is set for others to follow is one such trait.  Another trait would be to risk happiness to ensure the survival of those dependant on you (as seen when the emperor weighs Genji’s womanizing against his reputation of being financially responsible).  This trait goes parallel with the need to make life-changing decisions that can affect others (such as the decision maker’s family, friends, employees etc).

The traits mentioned above share a common theme, selflessness.  Each and every trait associated with ‘paternal’ responsibility is undermined by the theme of devoting yourself to the well being of others.  This mentality itself is directly fused with the ideals of the Samurai.  The Samurai were known to hold themselves to the strictest codes of honor and loyalty towards themselves and their immediate superior, to disregard this code meant disgrace…remedied only through a suicidal ritual.  So in essence the genji-mon on the tsuba reaffirms the samurai’s belief in his role in society…similar to a father who tattoos his newborns name on his chest in order to affirm that, “this is my child, and I am his father.”

Okay, we’ve looked at the possible link between The Tale of Genji and our Tsuba in terms of moral implications, but so far we ignored an equally important aspect of the Genji-Mon, its connection with traditional incense burning and what that means to our samurai friend.

The Art of Kodo (Koh doh) is one that can be immediately enjoyed yet can take over 30 years to master.  The Art consist of performing the incense ceremony, making incense and learning various incense games.  This is probably a very shallow explanation of Kodo due to that fact that I am not too familiar with the practice.  Historically incense burning in has a spiritual context.  The Japanese believed that perfumed smoke had the ability to “breach the invisible barrier between earth and heaven, enabling communication between man and the gods [or ancestors]. Incense, therefore has been an integral part of worship since the earliest times.”  That is why it was not uncommon to find that people prayed next to their incense burners in old .  (Here’s an interesting side note:  Incense making games are referenced in Genji in ‘A Branch of Plum’ chapter in Genji).

The spiritual implications added to the tsuba through the historical context of the Genji-Mon add an even richer meaning to the overall impact of its presence on the tsuba.  Does this mean that the man who owned this sword was a spiritual man?  Not directly, no, but it would be ignorant to completely discard this aspect of the genji-mon.

Now I must take this time to address the various other aspects of the Tsuba, which are not covered in depth in this paper.

In my introduction I stated that, “In this realm of viewing art, the viewers knowledge of Japanese History in all its genres are crucial to understanding Art the way it was meant to be seen by the Artist.”  My knowledge of Japanese symbolism is restricted to a semester of Japanese art history and my gathered knowledge through various other means.  This paper focused primarily on the genji-mon and Tsuba, but 3 other very distinct symbols appear on the Tsuba, which are ignored in my analysis for the sake of focusing the argument to a specific literary source.  For example, on the right side of the genji-mon there is a cutout of what is most obviously a two-story pagoda.  Historically the pagoda’s function is that of a reliquary for the remains of the Buddha.  Thus anchoring its roots so obviously in Buddhism and all its aspects.  The two overlapping rings located opposite the genji-mon are alien to me in meaning but are reminiscent of overlapping rings that stand vertical behind Yakushi in the Yakushi Triad.  Finally the fluid/water like symbol opposite the pagoda is alien to me as well, but its size indicates importance and I’m sure that its meaning deserves as much attention as any other on this tsuba.

With that said, I would like to comment on the protective aspects of the Tsuba itself intermingled with the ideals associated with the symbolism depicted.  I would imagine if I was a samurai and I commissioned an artisan to make me this tsuba I would have carefully chosen which symbols I wanted and where I wanted them.  Its not the case that the Samurai had these insignia’s sown into his dress robes, no, he had them embedded into his tsuba, the protector of his hand, the balancer of his sword, and the key to his success as a warrior.  During numerous battles a sword must endure tremendous torque, tension and abuse…durability is second to none in sound weapon.  You wouldn’t protect your household with a gun that’s known to misfire, and a samurai cannot be expected to serve his master with a sword known to faulty.  The sword only comes in second to the samurai’s hand that controls it.  The samurai’s skill is concentrated through his blade, and coincidently the barrier between man and metal is the tsuba.

Now lets say I value my sword and my hand, therefore my tsuba must be more than a mere hand guard, it must be every bit as worthy to enter battle as my blade and my heart, therefore I make sure that my tsuba ‘prays’ for me every time I swing my sword in hopes that its function is never inhibited.  So I adorn my tsuba with insignia of the morality and spiritual beliefs I hold so dear to my heart.  So through symbolism and function I have created a shield in which my belief in responsibilities, and the teachings of Buddhism are evident every time I unsheathe my sword.  This idea is the ultimate reality when the marriage of symbolism and function take place in this tsuba.

It is clearer now than it was this morning the implications literature has on objects, whether functional or decorative.  This particular tsuba is infused with tremendous meaning both for me as a scholar, but even more so to the man who originally owned this.  I feel that my view on the tsuba is severely limited to my knowledge and study of a single emblem, which is only ¼ the insignia embedded on the tsuba.  In a way it kind of boggles the mind to think on what my outlook in life would be had I had a richer education in the history of many things.  I doubt that I would ever be able to glance randomly throughout the city and not see a thousand tales and legends breathing the air of my vision.