Haynes summarises the present thinking regarding the Sōten group of Japanese sword guards when he states, in his Index of Japanese Sword Fittings and Associated Artists, that work by Sōten I, the first artist of the , is very rare.  He suggests that, prior to his use of the Buddhistic title of nyūdō which followed the shōdai's early move from to Hikone, his name was read as Munenori.  Most of the work of this artist was in solid plates of iron or shakudō; openwork designs were very rare.  There is now some doubt as to whether Kitagawa Shūten was the same artist as

Sōten I, as once he was thought to be.

The work of Sōten II, the son of the former artist, is difficult to distinguish from that of his father.   He probably made some openwork pieces, both in iron and shakudō, but not featuring warrior subjects.  The existence of a third generation is now questioned and, if such an artist existed, his work cannot be distinguished from the many students and followers who signed their work as being by Sōten.

43 6 1933 is a beautifully rendered, openwork version of the Chikurin shichi Kenjin (the Seven Sages of the Bamboo Grove) on a fine, polished shakudō plate.  It is tate-maru-gata in shape, measuring 7.4 cm in height and 6.7 cm in width, and has a slightly raised and squared rim.  Of the eight marubori figures — Genshiki's boy attendant is included on the reverse — three have copper faces, three silver and two shakudō.  Their features, with the high cheek-bones that are a recurring characteristic of all Sōten work, are beautifully detailed, as is the gold decoration of their gowns.  The bamboo is depicted in skilful openwork, the oval apertures imparting a sense of depth to the image.

There are two ryō-hitsu, within raised rims, and there are indications on the nakago-hitsu of its mounting on a blade.  It is inscribed on the obverse SOHEISHI NYUDO SOTEN SUKE KORE and, on the reverse, OMI SHU HIKONE (NO)JU.

This tsuba featured in no 402 of the second Gilbertson-Nairn sale, held by Glendining on .  The is described thus:

Shigeyoshi; shakudo, the Seven Sages in the Bamboo Grove, signed:

The Seven Sages of the Bamboo Grove are described by Joly, each with their associated legend, on page 309 of his Legend in Japanese Art.  They comprise the following 'poets, literati and convivial immortals':

1.  Genshiki, with his boy attendant, and carrying a staff;

4.  Kioshin, with an unrolled makimono;

In spite of the fine detail on this tsuba, it is not possible to identify all of these figures, but two fans, the boy attendant and an unrolled makimono are all clearly shown.

The Kinko Meikan, on pages 519 and 520, illustrates five tsuba attributed to Sōten, but in no case does the author make any distinction between the two masters.  The reason for this omission may be related to Haynes' assertion that 'most of those pieces assigned to the second generation are examples that are thought inferior to the work of the first generation' — a suggestion supported by the fact that, in the former book, Sōten's work is graded as varying between Jokō and Ryōkō. 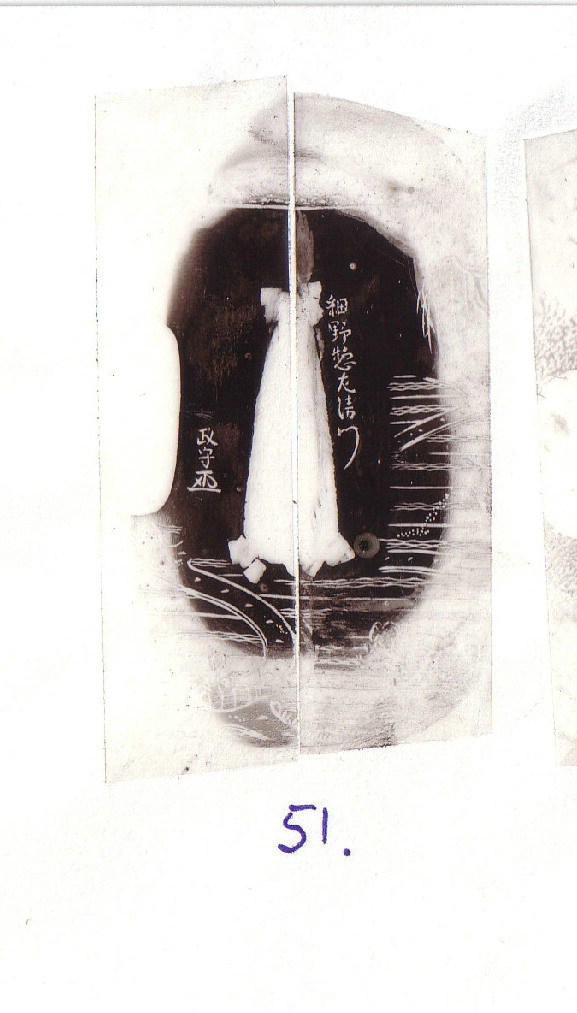 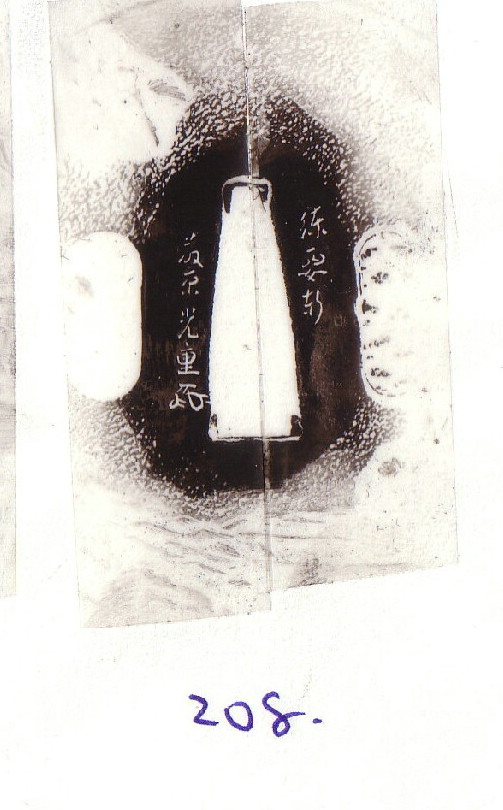 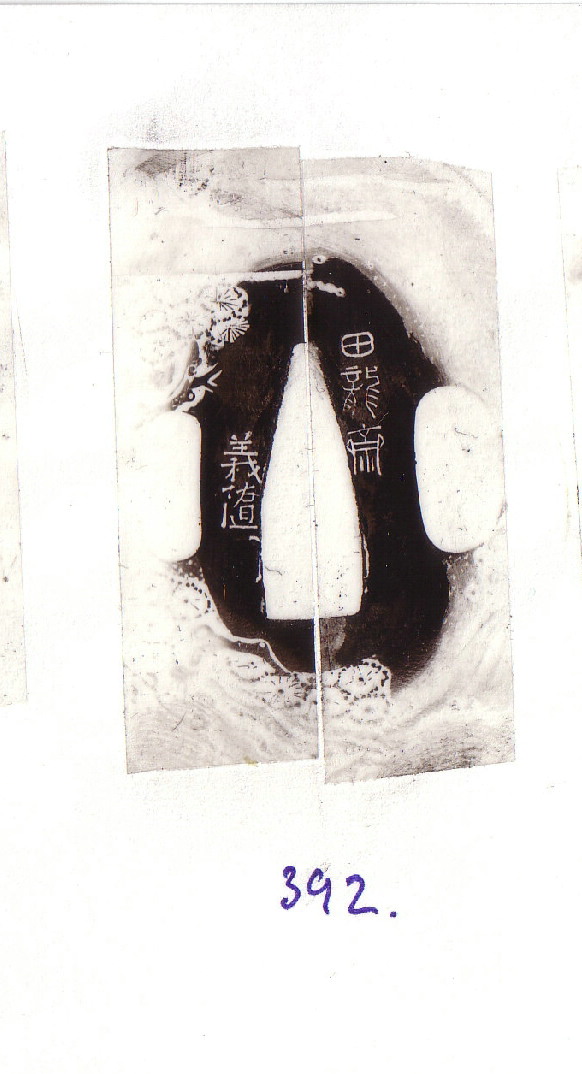 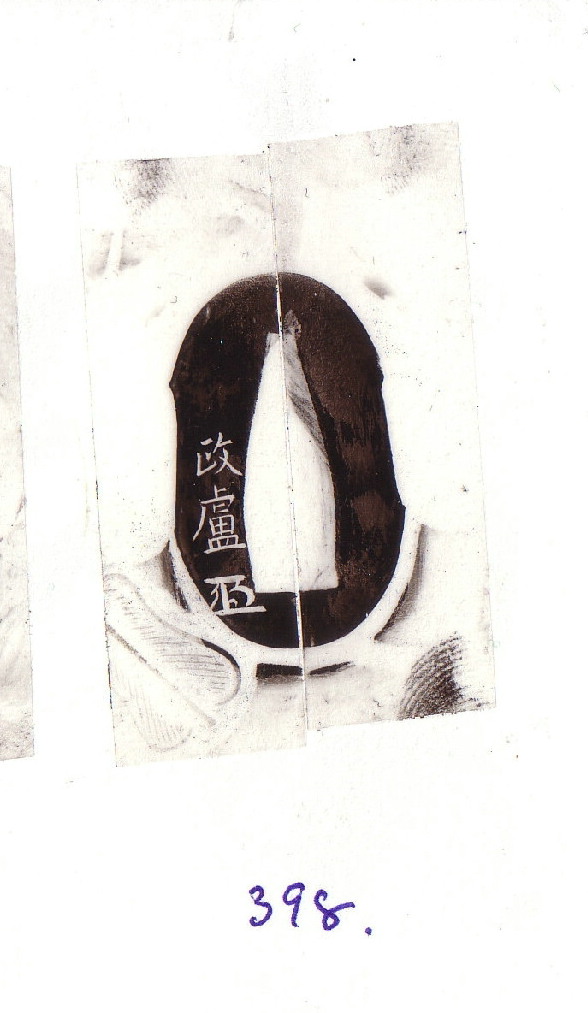 The inscriptions illustrated of the obverse and reverse of the first of these tsuba are, with one exception, identical to those on the author's tsuba.  In this illustration, as in a further two of the remaining four, the kanji for 'shi' in Soheishi is rendered in such a way as to replace its initial horizontal stroke by a lozenge-shaped component; this is a feature said to be common to most — but not all — genuine Sōten work.

On pages 62-63 and 64-65 of his Catalogue of the Dr W Fahrenhorst Collection, Inami Tomihike illustrates two tsuba that are attributed to Sōten.  The first of these is very similar, both in its design and its description, to the one being studied, while the second is almost identical.  On both of these tsuba the character for 'shi' in Soheishi is written in the conventional manner of the three-stroke kanji, with a horizontal first stroke.

All certified Sōten pieces appear to be tsuba, and no certified smaller mounts are known to the author.  This causes him to view the existence of the fuchi-gashira

WAY 172 29 1936 with somewhat mixed feelings, since it casts into some doubt the suggestion that the tsuba may be the work of the second Sōten master.  Surprisingly, since the two items were acquired from two completely different sources, separated by an interval of four years, they are clearly by the same hand.  The shakudō is of the same high quality on all three pieces; the recesses enclosing the bamboo are a mirror of those on the tsuba; and the seven figures — Genshiki's attendant is not included on these smaller pieces — all have similar features and identical decoration on their clothing.  The fuchi and kashira are slightly more decorative than is the tsuba in that their makimono are gilded in their entirety rather than having linear gilding, and there are occasional areas of gold yakitsuke on the trunks of the bamboo.  Neither the fuchi nor the kashira is inscribed. 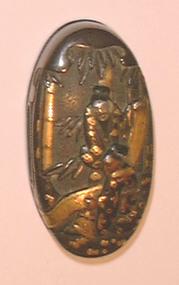 This fuchi-gashira was purchased in 1936 by WA Young from the shop owned by GG Davies and Kenneth Horn: it was previously a part of both the and the Woodwright collections.  Little is known of P Adams but, like many of the fuchi-gashira from the collection of Surgeon Rear-Admiral CS Woodwright, CBE, RN, this pair is mounted on a tailor-made, two piece stand of ebony.  No other collector is known to have mounted his fuchi-gashira in this fashion.

In considering the possible provenance of these two artefacts, three options are available to us, as follows:

The marked similarity between the two examples makes it extremely unlikely that two different artists were involved in their production.  I am of the personal belief that, while the tsuba would probably be granted a kanteisho as being genuine Sōten work, the existence of the fuchi-gashira suggests that they may all be high quality copies, possibly by one of the two artists of the Nomura school who were named Kanenori.