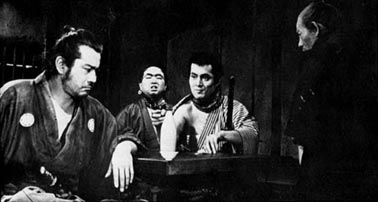 A position of particular importance in the development and evolution of bujutsu, especially within the rigid and stratified society of Tokugawa Japan, was occupied by "a sinister figure of dread in the land, making the weak-kneed sweat the sweat of terror", the samurai without a master, the warrior who had been released: the ronin. Bujutsu owes these warriors a great deal. Here was the ideal fighting man - ideal because he was self-reliant and self-disciplined, therefore unpredictable in combat and always in a state of readiness. As a class, their fighting potential was acknowledged repeatedly by the best military leaders in the land. Even the huge armies of Ieyasu could do very little against the groups of ronin. They proved to be indomitable foes, due to both their skill and their hatred of Ieyasu and his forces.

In the Kamakura and Muromachi periods, when warriors held lands that they occupied, a ronin was a warrior who had lost his lands. During these periods, as small-scale wars frequently occurred throughout Japan, the daimyo needed to augment their armies, so ronin had opportunities to serve new masters. Also, some ronin joined in bands, engaging in robbery and uprisings. 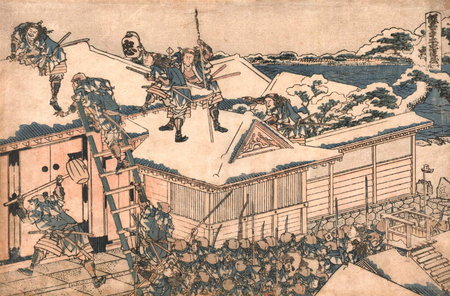 Especially in the Sengoku period, daimyo needed additional fighting men, and even if one's master had perished, a ronin was able to serve a new lord. In contrast to the later Edo period, the bond between the lord and the samurai was loose, and some samurai who were dissatisfied with their treatment left their masters and sought new lords. Many warriors served a succession of masters, and some even became daimyo. As an example, Tōdō Takatora served ten lords. Additionally, the division of the population into classes had not yet taken place, so it was possible to change one's occupation from warrior to merchant or farmer, or the reverse. Saitō Dōsan was one merchant who rose through the warrior ranks to become a daimyo.

Oda Nobunaga had realized early in his career as warlord the tremendous value of such men whom the fortunes of politics and/or war had made outcasts. Akechi, who ultimately killed Nobunaga, had been a ronin, one whose skill and personality were so impressive that Nobunaga had raised him to a position of equal standing with that other famous general, Hideyoshi. As Toyotomi Hideyoshi unified progressively larger parts of the country, daimyo found it unnecessary to recruit new soldiers. Next, the Battle of Sekigahara resulted in the confiscation or reduction of the fiefs of large numbers of daimyo on the losing side; in consequence, many samurai became ronin. As many as a hundred thousand ronin joined forces with Toyotomi Hideyori and fought at the Siege of Osaka. In the ensuing years of peace, there was less need to maintain expensive standing armies, and many surviving ronin turned to farming or became townspeople. A few, such as Yamada Nagamasa, sought adventure overseas as mercenaries. Still, the majority lived in poverty as ronin. Under the third Tokugawa shogun Iemitsu, their number approached half a million. 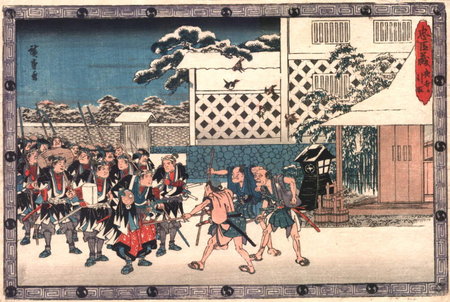 Initially, the shogunate viewed them as dangerous, and banished them from the cities or restricted the quarters where they could live. They also prohibited serving new masters. As ronin found themselves with fewer and fewer options, they joined in the Keian Uprising. The Keian Uprising (慶安事件, Keian Jiken?) was a failed coup d'etat attempt carried out against the Tokugawa shogunate of Japan in 1651, by a number of ronin. Though it failed, the event is historically significant as an indication of a wider problem of disgruntled ronin throughout the country at the time. Masterminded by Yui Shōsetsu and Marubashi Chūya, the uprising is named after the Keian era in which it took place. According to strategist Yui's plan, Marubashi would take Edo Castle, the headquarters of the shogunate, using barrels of gunpowder to begin a fire which would rage through Edo, the capital. In the confusion, with the authorities distracted by firefighting efforts, the ronin would storm the castle and kill key high officials. At the same time, Yui would lead a second group and seize the Tokugawa stronghold in Sunpu (modern-day city of Shizuoka). Further action was planned for Osaka Castle and Kyoto. They timed their rebellion to take advantage of the death of Shogun Tokugawa Iemitsu, as his successor, Ietsuna, was still a child. The conspirators aimed to force the shogunate to relax its policies of seizing han and dispossessing daimyo, which under Iemitsu had deprived tens of thousands of samurai of position and income, adding them to the ranks of ronin. Ultimately, however, the uprising failed when the conspirators' plan was discovered. Marubashi Chūya fell ill, and, talking through his fever dreams, revealed secrets which made their way to the authorities by the time the rebels were ready to move. Marubashi was arrested and executed in Edo; Yui Shōsetsu escaped that fate by committing seppuku, in Sunpu, upon finding himself surrounded by police. Several of the rebels committed suicide alongside him. The families of the conspirators as well were then tortured and killed by the authorities, as was usual at the time; several were crucified.

In the aftermath of the suppression of the uprising, the shogunal Elders (Rōjū) met to discuss the origins of the uprising, and how to prevent similar events from occurring in the future. Originally, most of the Elders sought to take severe measures, including expelling all ronin from the city, but they were eventually convinced by Abe Tadaaki to take a more rational tack. He suggested reducing the number of ronin opposed to the shogunate, not through expulsion, but by introducing more favorable policies. In particular, he convinced the council that the shogunate ought to do away with the law of escheatment, and to work to help ronin settle into proper jobs. Forcefully expelling a great number of people from the city, he argued, would only serve to create more opposition to the government. Far from being an isolated incident, the Keian Uprising was followed by an event the following year involving several hundred ronin, and another soon afterwards in Sado. Granted, these were not directly related, that is, none of the persons involved were the same, nor did they follow a single leader or organized ideology. Despite this, or perhaps because of it, it is significant to note how widespread the distaste for the shogunate was at this time, and the degree of the "problem" of the ronin throughout the country. This forced the shogunate to rethink its policy. It relaxed restrictions on daimyo inheritance, resulting in fewer confiscations of fiefs; and it permitted ronin to join new masters.

Ultimately the ronin proved to be one of the most powerful forces among those in league against the Tokugawa system of direct affiliation to provincial lords, which they helped to overthrow in favor of a system of general affiliation with and loyalty to the emperor, within whose modern army they finally found their rightful place. It has often been assumed that a ronin, freed of the traditional bond of allegiance to a lord and a clan, automatically became the enemy not only of individual lords and samurai but of the very system upon which Japanese feudal society was based, thus becoming the natural protector of commoners, who, after all, helped to keep him alive. In most cases, this assumption would not be correct. To be sure, a ronin was usually in revolt against his fate, but generally (with certain notable exceptions) not so much because he felt that the system itself was unjust and despotic, but rather because he by force of circumstances had been separated from the military establishment and, therefore, deprived of his rightful position of honor within the system. His independent position usually made him even more arrogant and overbearing than the affiliated samurai, since control over him through pressure by other samurai or clan regulation was impossible.

In general, he was and remained always a warrior, with a sustained belief in his continuing military status, despite the fact that he had become separated from the buke's military organization. In isolated cases, a particular warrior would take a truly independent stance, which, due to the massive force of the establishment he was battleing on an individual level, often produced a fighter of truly heroic proportions whose exploits comprise some of the most fascinating episodes to be found in Japanese history and literature. Among the most famous ronin are Miyamoto Musashi, the famed swordsman, and the Forty-seven Ronin. 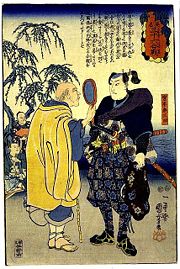