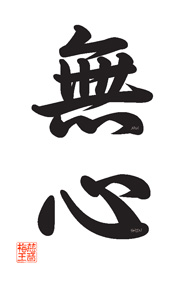 MU = nothingness; none; nothing; not

literally means innocence. It refers to the state of mind where one does not assume anything but is open and prepared for anything - which is vital for combat.

is a state of mind that is achieved by very harsh and strategic training and programming of martial art techniques. It is where the training takes over and the physical movements no longer require any thought yet it is much more than mere reflex. Much like a very accomplished musician that no longer reads the music, he closes his eyes and just plays from the heart / mind / soul with spirit born only through endless hours of diligent, methodical, and mechanical practice - he just lets it go. He plays by "feel" not by thought or movement the same way a very skilled martial fighter "feels" his space, his opponents movements and connects directly to that feeling which allows him to fight unrestrained by thought, or technique.

The fighter does not try to read his opponents movements, he becomes his opponent and those movements allow him to perform flawlessly. The actions simply flow in precise harmony with whatever is happening which is an advantage over a calculating opponent. is not meditation nor can it be attained through meditation. Note that - cannot be attained through martial arts practice. Mu (Mukusu) also means to lose something and this would be - losing ones bad habits, losing ones mind (not the crazy way), losing ones restrictions, inhibitions, fears, etc.

The modern phrase you see often - No Fear - is a part of the meaning of . (Nakenashi) can mean - a very small amount which goes with the saying - from a little, one can know a lot, less is more etc. It means that complex things are no-minded down to the most  simplistic things and applied to all things - Musashi said "The way can be found in all things".Everyone has experienced the state unconsciously at various times but the ideal is to develop the state so that it can be induced anytime and for extended periods. Very few are able to achieve this. Most of those that have, are not really aware that they do it. They simply do it when necessary like one would blink or breath. is a form of enlightenment but not the type that is associated with  philosophical  Zen. (Mu-i) can mean - unintentional and that is powerful because you want your abilities to be intentionally unintentional. This can only be forged through the most severe of martial science and training. When you achieve , you literally won't mind.............