Hon'ami Koetsu (1558-1637) was a Japanese craftsman, potter, lacquerer, and calligrapher, whose work is generally considered to have inspired the founding of the Rinpa school of painting.

Hon'ami was born into a family of sword polishers and connoisseurs who had served the Imperial court as well as the likes of Tokugawa Ieyasu and Oda Nobunaga, major warlords of the Sengoku period (1467-1603). His grandfather was counted as one of the "companions and advisors" (doboshu) of Shogun Ashikaga Yoshimasa. Koetsu's father, Hon'ami Koji (d. 1603), received a regular stipend from the Maeda family, in payment for his services as a sword connoisseur. Koetsu would continue this relationship of his family with that of the Maeda, and with their domain in Kaga Province; he would advise the Maeda on swords, paintings, and other art objects. Koetsu would meet many members of the art community through his connections with the Maeda, including tea master Kobori Enshu.

Koetsu would also develop a close relationship with the Noh theater, and with the Kanze family of actors who lived near the Hon'ami family compound in northern Kyoto. He may have performed in No productions as a chanter, and designed a number of works for use by the actors or the theater.

Although trained as a swordpolisher (not a "swordsmith" in the standard Western sense; in Japan the tasks of forging and finishing a blade are performed by different craftsmen), Hon'ami became accomplished in pottery, lacquer, and ceramics as a result of his interest in Japanese tea ceremony, which had been revived and refined only a few decades earlier by Sen no Rikyu. In this art, he is regarded as one of the top pupils of the tea master Furuta Oribe and of the style known as Raku ware. Koetsu was given clay by Donyu II, the grandson of the first Raku potter, Chojiro I. Even though Koetsu form was inspired by the Raku family tradition, he was such a great artist he added his own character to his tea bowls. One of these (called "Fuji-san') is designated a National Treasure. In all of Koetsu's surviving correspondence, only one letter in fact concerns swords. He is believed to have passed on his professional obligations in this matter to his adopted son Kosa and grandson Koho. 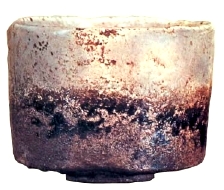 He was also one of the greatest calligraphers of his period, inspired as many of Japan's greatest calligraphers were, by the court writings of the Heian period. He was taught in this field by Prince Soncho, who is said to have taught him the style of the famous classical Chinese calligrapher Wang Xizhi. He produced a wide variety of works, all in a flowing cursive style that recalled those classical traditions. Along with Konoe Nobutada and Shokado Shojo, he came to be known as one of the Three Brushes or Sanpitsu of the Kan'ei Era (kan'ei no sanpitsu). Though he created a number of works in this classical style, Koetsu also developed his own personal style of calligraphy, and taught it to many of his students. 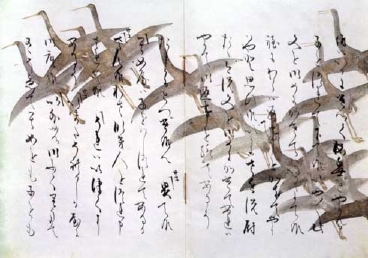 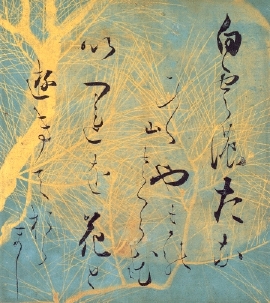 Lacquer was yet another field in which Koetsu was innovative and very active. Though earlier works attributed to him are quite conservative, towards the end of the 16th century and beginning of the 17th, he began to employ a number of innovative techniques. He specialized in designs using tin, lead and other base metals, along with gold and mother-of-pearl. 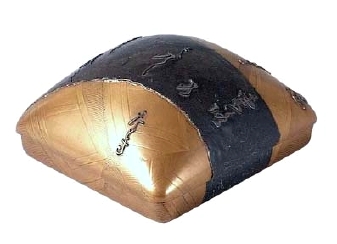 Hon'ami entertained a close relationship with the painter Tawaraya Sotatsu, who is supposed to have decorated many of Hon'ami calligraphic works in gold leaf and paint. The two worked very closely for about fifteen years after the turn of the 17th century, and some scholars believe the two artists were related by marriage. Sotatsu was a major member of the Rinpa school, and his paintings most likely reflect some degree of Hon'ami's influence and style.

In 1615, Hon'ami began an artist community northwest of Kyoto, in a place called Takagamine granted him by Tokugawa Ieyasu. Scholars disagree on whether this community was more focused on art or on religion, specifically Nichiren Buddhism, and whether this land grant was generous, or a form of exile. Nevertheless, it was here that Hon'ami would develop his unique style of painting and design which would later develop into the Rinpa school. The retreat was called Taikyo-an, and was used for prayer meetings and meditation, in addition to its function as an artist colony. A number of important figures, including the historian Hayashi Razan, visited there towards the end of Koetsu's life. After his death in 1637, the colony was disbanded and the land returned to the shogunate by Hon'ami Koho, Koetsu's grandson.