This tsuba was taken out of Japan about one hundred and thirty years ago. Just a few short years after the enactment of the HAITO REI edict of 1876, which abolished the wearing of swords in public. Because of this edict a great many swords and tsuba came on the open dealers market for sale. Many of the sword fittings were sold to foreigners who were visiting, or working in Japan at this time. This tsuba might have passed from Amiya to the Paris dealer Hayashi where Mr. Kay probably bought it.

M. Arthur Kay (1860-1939) (illus. A) was a businessman from Scotland who had interests in France and other European countries. He was a very avid collector in many areas of fine arts. His large collection of Japanese art was sold at the Hotel Drouot the 20th to 26th of November 1913. There were only three tsuba among the 1,401 lots, and this Joi tsuba was one of them, as lot 1386, in the auction catalog (illus. B). It passed to a French collection and by 2013 it was sold in Germany. Because this tsuba has passed through so few hands in its life time we have only a short history of its existance. Before it left Japan it was no doubt in a family collection, but we do not know which one. It would be interesting if one could find out.

The artist of this tsuba is: Sugiura Issando Nagaharu Joi (illus. C), more commonly spoken of as just Joi (H 02135.0). He was born in 1701 and died July 24, 1761. He is the third member of the great NARA SAN SAKU, with Nara Toshinaga and Tsuchiya Yasuchika I. Of these three artists we find more confusion with his work than that of the other two. The reason for this is that Joi worked in various styles during his lifetime. He is said to have invented the shishiai-bori style of carving which in the West is known as intaglio rilevato; carving that is flush with the surface of the plate. This style of work was very popular and Joi produced many examples in tsuba, fuchi kashira, and kozuka in this format. His younger brother, whose name does not seem to be recorded, and other relatives, as well as a large group of students worked in his studio and all seem to have had some hand in the production of his work, which was the usual method of production in the studios of all the great artists, both in the East and the West.

This tsuba is a large round copper plate of katana size with the face showing Hotei riding on a horse, that looks much like a mule, or perhaps a Mongolian pony. Hotei (illus. D) is one of the seven gods of good fortune and probably the most popular. The name Hotei is in actuality derived from the linen bag that he is often shown carrying over his shoulder, his true name might be Keishi, who about 916 came to the Ming Chu. Sometimes in Japan he is known as Putai no san. His other attributes, besides his horse, are his wooden staff, which is taller than he is, and his uchiwa fan which is in Chinese style. This subject is found on a number of Joi fittings but with multiple variations in most cases. In this case his staff and fan are carved and inlaid on the reverse side. The plate surface is ishime of very fine grain. The horse, robe and staff are in pure shishiai style. The head, body and arm of Hotei are above surface inlay, as is the fan on the reverse side. The clouds are carved well below the plate surface and have gold inlay touches and a silver moon on the back side. The amount of detail carving is hard to see in some cases, as it is so fine. This portrayal of Hotei is no doubt taken from one or another of the many sumi paintings of this subject. The quality of this tsuba is far superior to that of many others with this same subject, and shows the true ability of the work of Joi. This type of judgment can only be made if one has studied the work of Joi and has had a hands on ability to view his work. Naturally this can be said for the study of all fittings.

The signature is on the reverse side and is not unique, but is very rare. It is as follows: Bujo Akasaka inshi raku Joi Nagaharu tsukuru..... 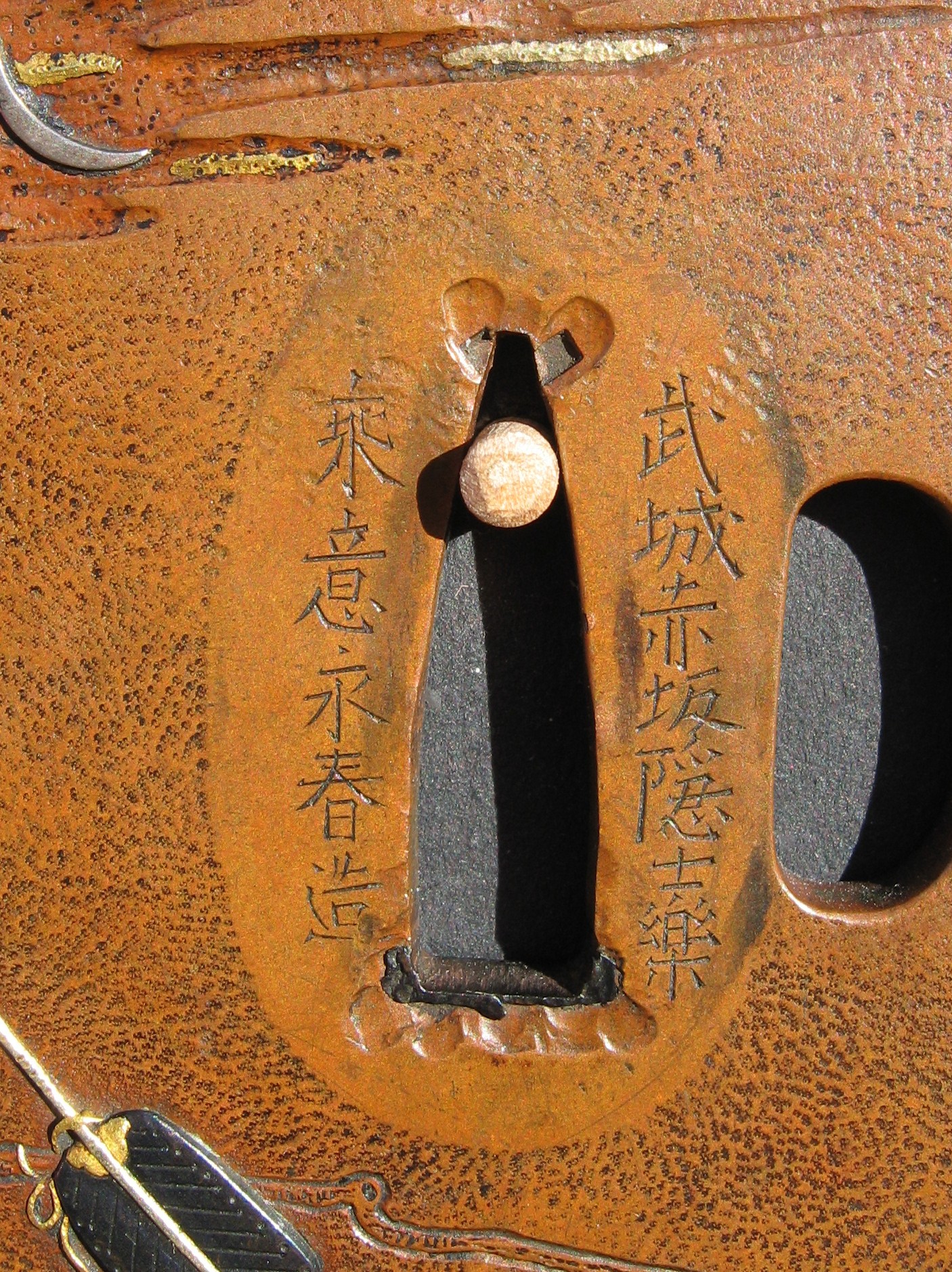 This signature, with the kanji, may be found in the Haynes Index at the top of page 451, at the conclusion of the Joi entry number H 02135.0. The meaning of this inscription is as follows. Bujo is a reference to the castle at Edo, and the Akasaka district of the city where no doubt he lived and worked. Inshi is to become a hermit or "take the tonsure", to shave ones head. Raku is, joy, pleasure, or retirement from the worldly life. This is his announcement that he will now be called JOI, as his nyudo name. The remainder of the inscription is: Nagaharu, his art name before and after taking the Joi name, and ending with tsukuru, which implies that this work was a joint effort with others doing the preparation work, probably his brother and others in his studio. The earliest record of this signature, found so far, is in: Mitsumura Toshimo, TAGANE NO HANA (illus. E), Kobe 1903-07, in the "Nara San Saku" volume section on Joi in the fuchi-kashira group (This book is not paginated). A fuchi-kashira lower left on the page, of a sennin in shishiai-bori style (read definition below), has the inscription: Bujo Akasaka inshi raku Joi Nagaharu saku su, the su in katakana. All is the same except for the saku su instead of tsukuru in the other inscription. Adding su seems to imply that this was a group effort even though saku implies that it is a sole work. In the Meiji period this fuchi-kashira was in the collection of Takesoe Shinichiro of Tokyo. It is not known where it might be today. Unfortunately none of the signatures on the fuchi-kashira were photographed, so we have no pure record of this work. The next publication of a work with a variation of this inscription is in: Kokubo Kenichi, Otsubo Kenzo, ZABO TAN SEN (illus. F), Tokyo 1974, page 76, item number 81. A copper plate tsuba with Hotei on a horse in the same position as the Kay tsuba, and on the reverse a child holding his fan. In this case the inscription is on the face of the tsuba. All of the inscription is the same except it ends with saku, without the su katakana kanji. The workmanship of this piece does not have the detail or quality that is to be found in the Kay tsuba. There is one other tsuba with the Kay inscription that was sent to me but I do not think it has been published (illus. G). It is an oval piece now having been cut down very severely. The face has most of a figure of Shoki and the reverse has most of an oni with the same inscription as the Kay tsuba. Why this work was so cut down in shape and size is not known. If there are other works by Joi with this inscription or its variants it would be very important to hear about them. It would be even better if some day all these pieces could be brought together and examined as a group.

The most famous tsuba by Joi is the iron plate guard with high relief inlay of Mure Takamatsu on horseback (illus. H), and with his squire with banner on a pole, on the reverse. This tsuba is signed: Nara, the NA kanji is minami (south), and the usual RA kanji. The rest of the signature is : Joi, with a carved seal reading Nagaharu. The whole aspect of this tsuba is unique to the work of Joi. There are two other tsuba with the same subject as the Kay tsuba that should be mentioned. One is at the beginning of the section on Joi in the TAGANE NO HANA (illus. I) (see above) of a copper plate tsuba with Hotei in the same position as the Kay tsuba but with a boy leading the horse and another boy on the reverse looking up at the moon. This is signed: Issando Joi. This tsuba was in the Wada Ishiro collection, its location today is unknown. There is one other tsuba with the same design as the Kay tsuba that should be mentioned. It is in the Halberstadt collection, Ogasawara Nobuo, Swordguards and Fittings from Japan The Collection of the Museum of Decorative Arts (illus. J), Copenhagen 1983, 2 volumes, number 15 top of page. This tsuba is very much the same as the Wada tsuba above. It is signed: Issando Joi with gold inlay seal of Nagaharu. No doubt there are others with this same design and with various signatures used by Joi, but they all should be studied with care and compared to the Kay example. Perhaps a full study of the work of Joi will be undertaken by someone in the future. 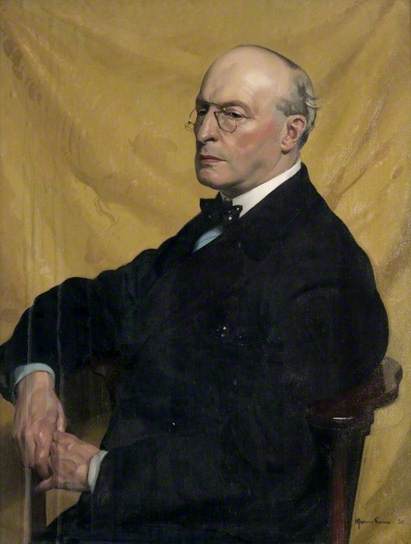 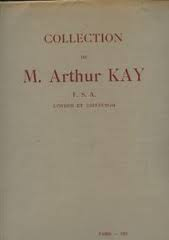 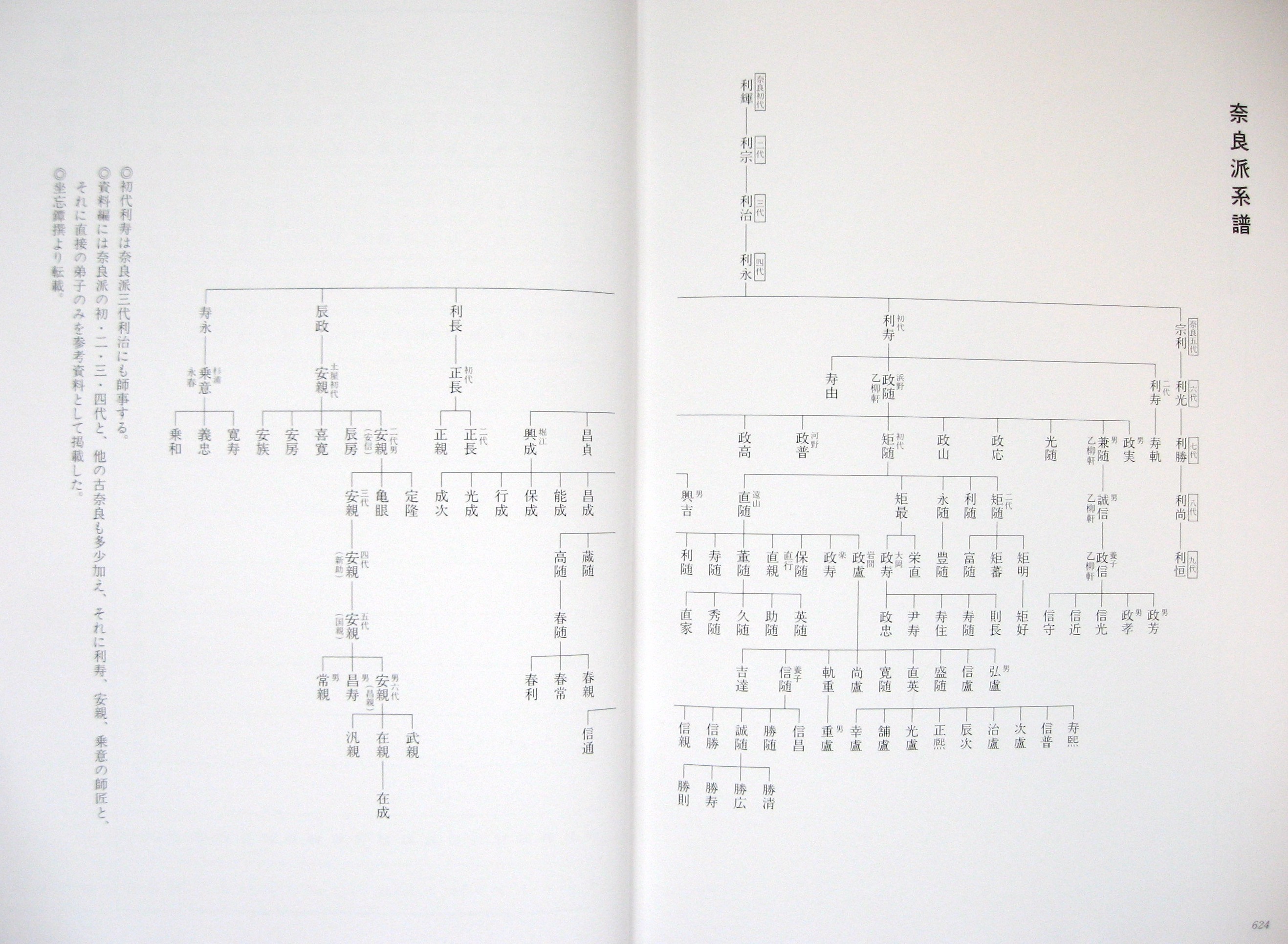 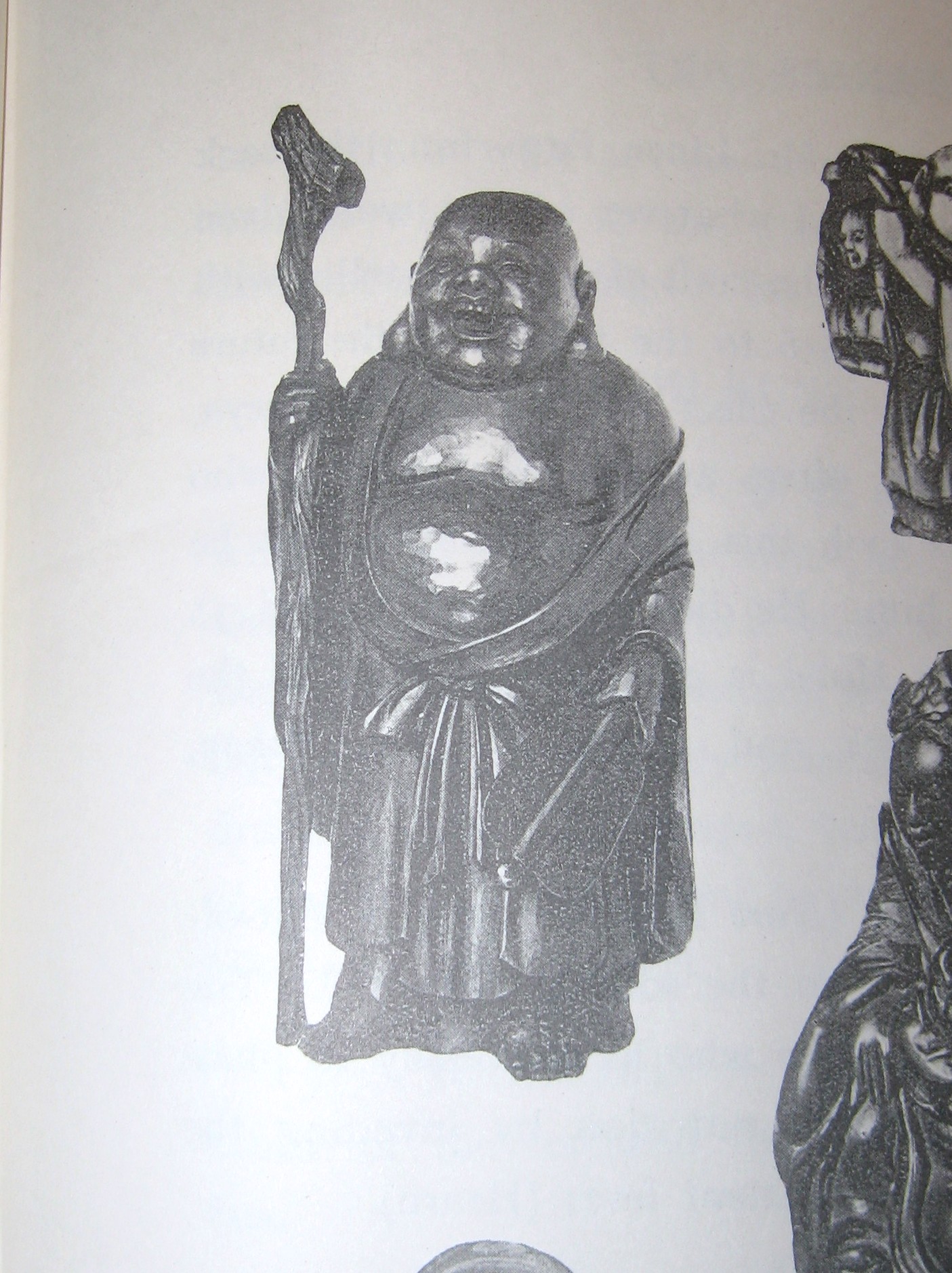 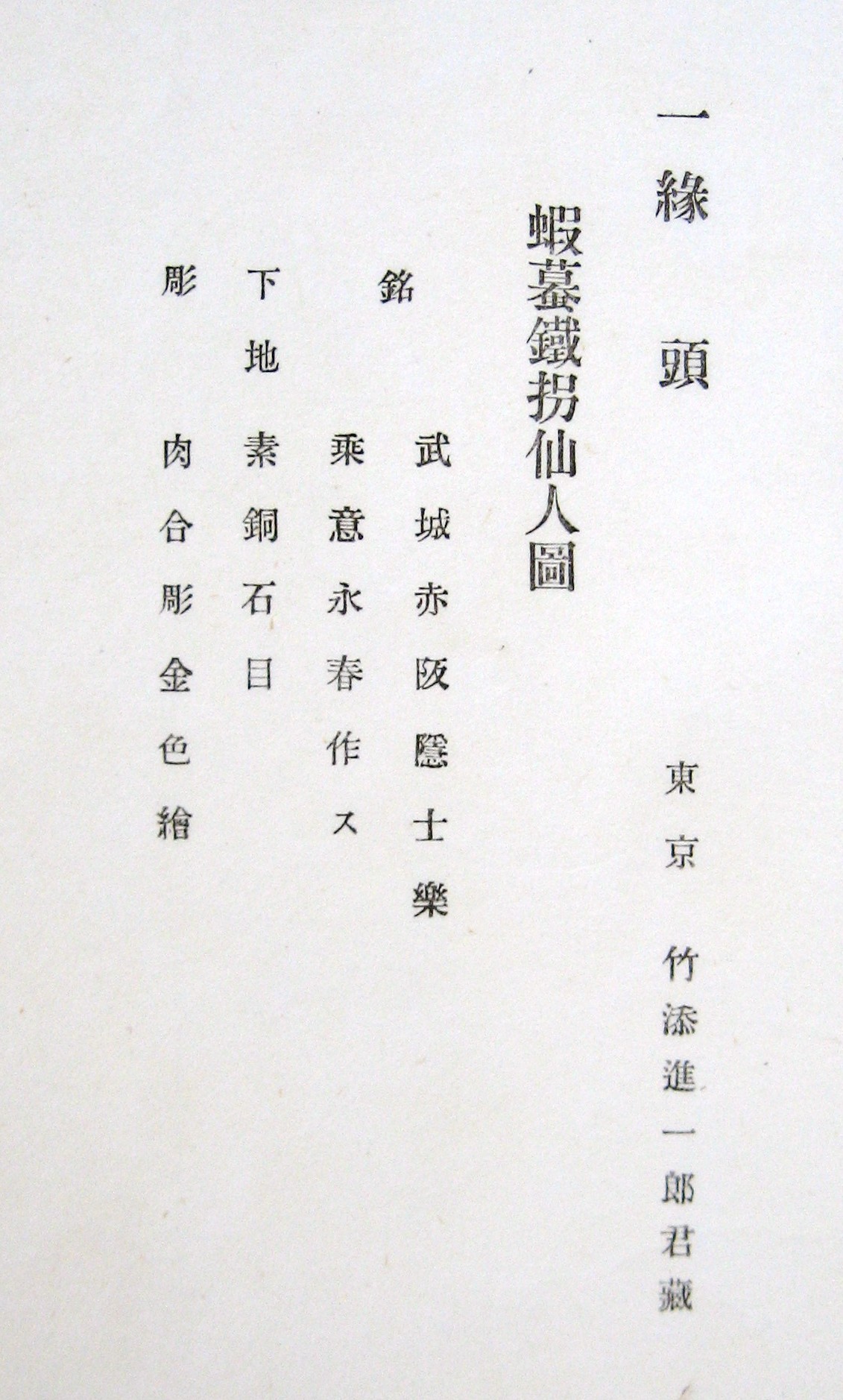 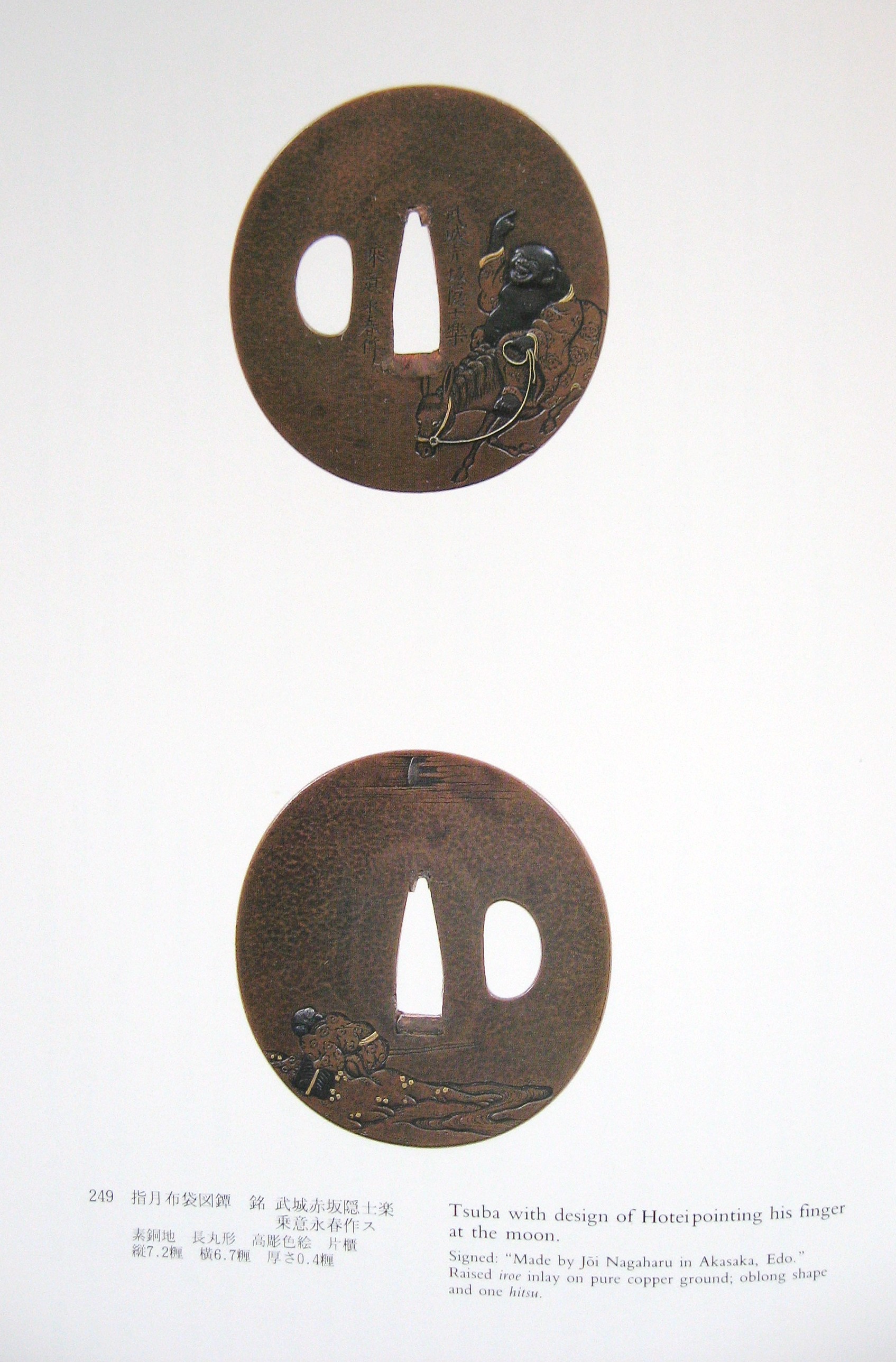 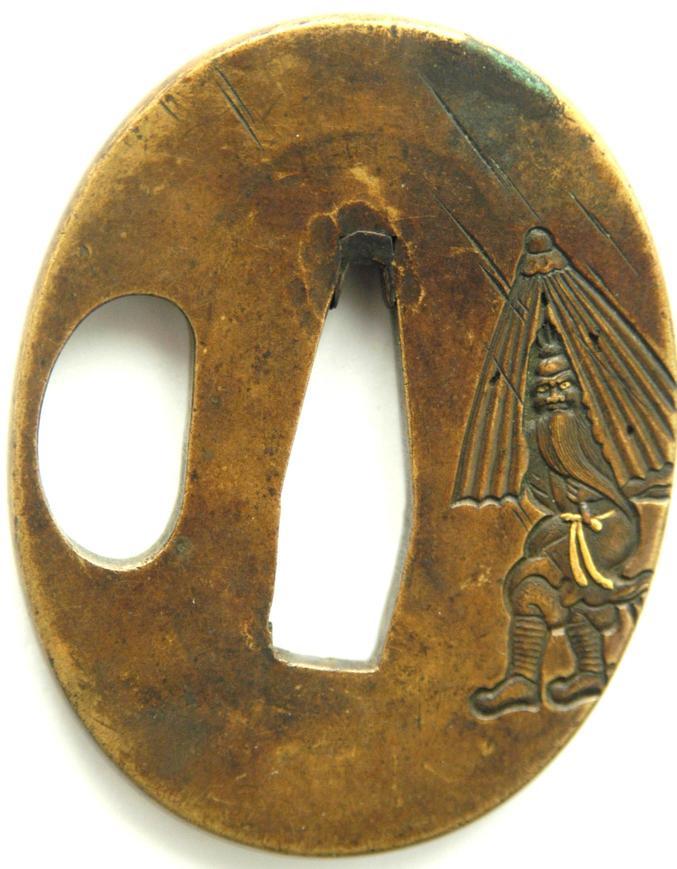 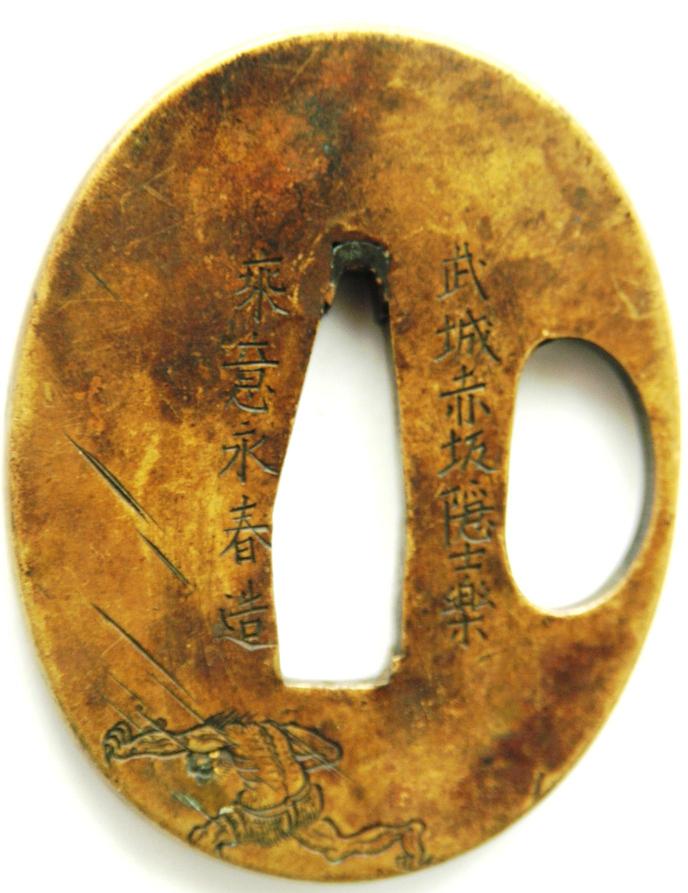 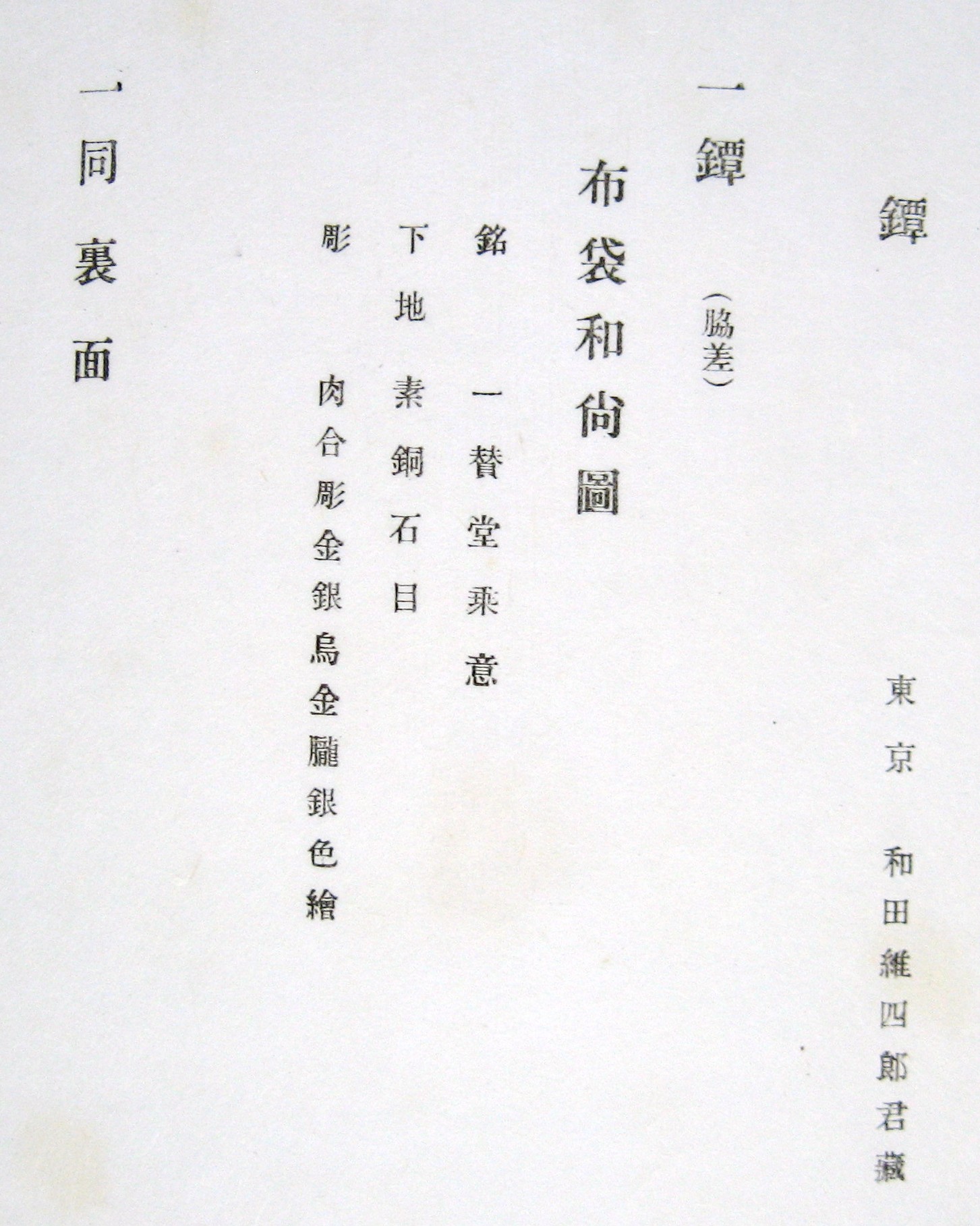 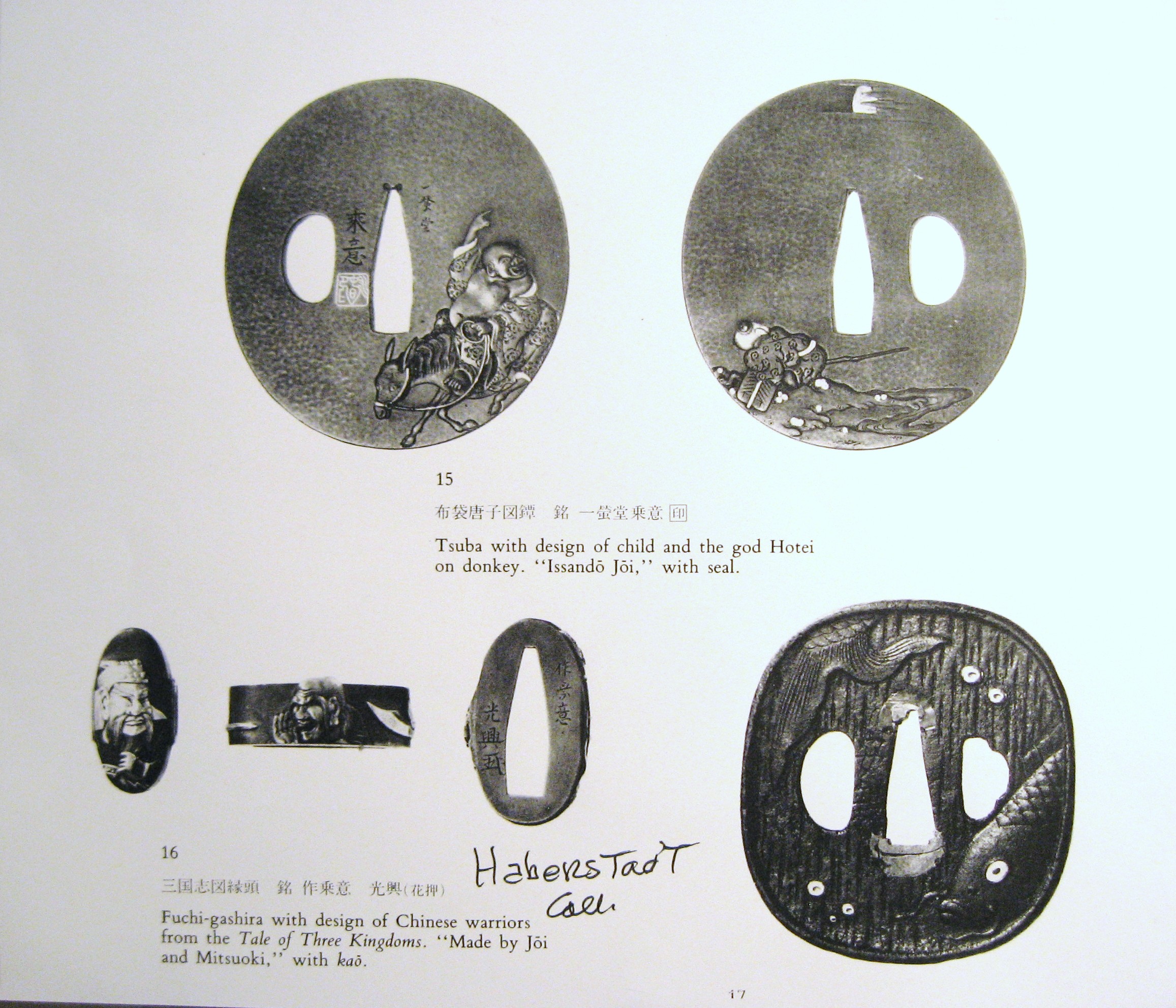 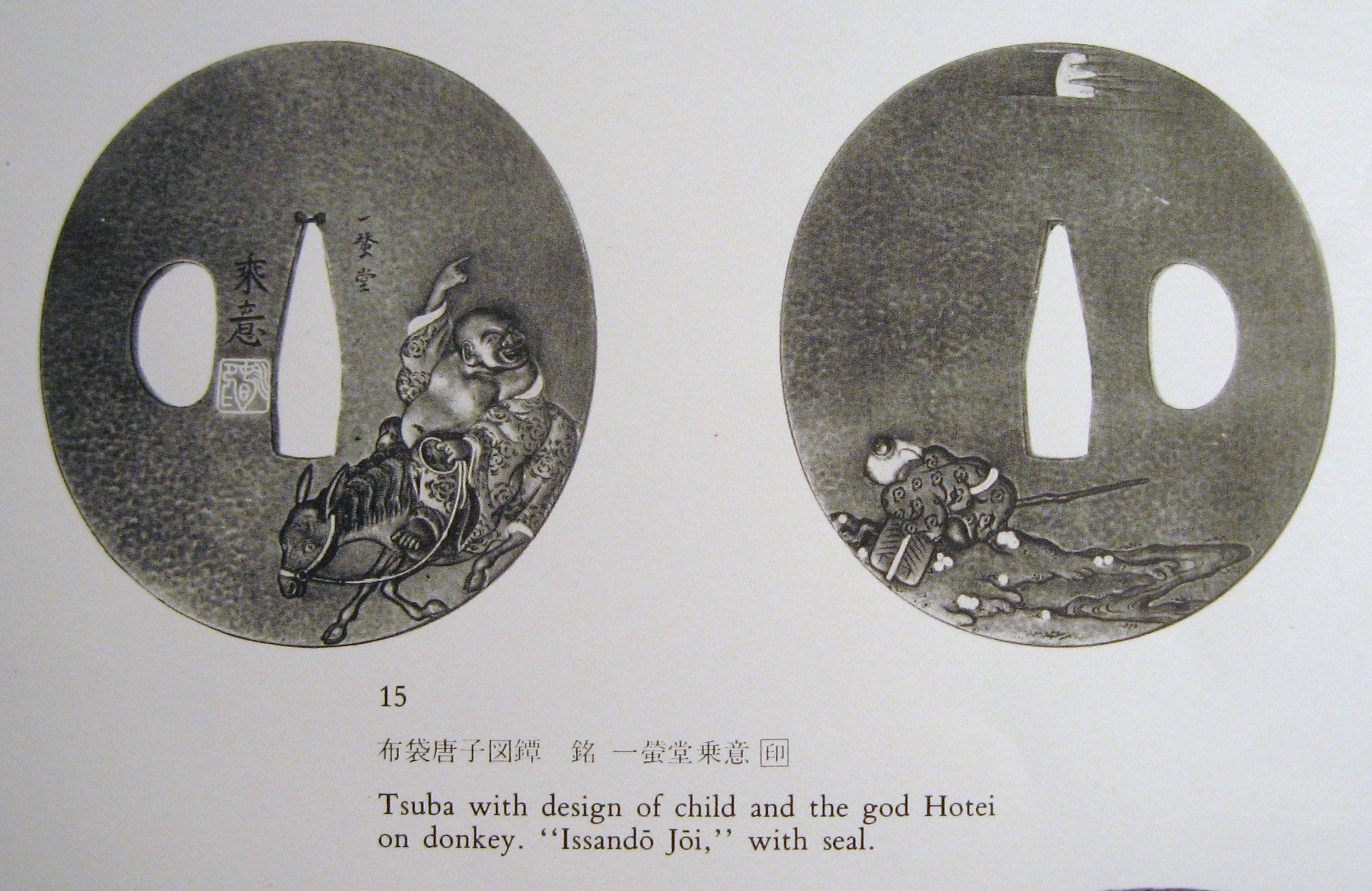