A HISTORY OF THE UKIYO-E WOODBLOCK PRINT

As the 16th century drew to a close, an urban middle class emerged in Edo, capital of the Tokugawa shogunate since 1603, as well as in other major cities such as Kyoto, Osaka and Sakai. These merchants, artisans and lordless samurai of low rank (ronin) developed a very special way of life with its own distinct literature and art, which came to be known as ukiyo. Ukiyo in early Japanese poetry is the floating, transient, idle world. As originally used in Chinese poetry, the term is resonant with the pessimism and melancholy of Buddhist philosophy. By the middle of the 17th century in Japan, it had acquired a new meaning. During these years ukiyo came to signify the elegant world of stylish pleasures. The novelist Asai Ryoi provided a definition in his 1661 novel Tales of the Floating World (Ukiyo-monogatari): "Living only for the moment, savoring the moon, the snow, the cherry blossoms and the maple leaves, singing songs, loving sake, women and poetry, letting oneself drift, buoyant and carefree, like a gourd carried along with the river current."

It is this era as well that witnessed the creation of ukiyo-e, "pictures of the floating world," the splendid genre painting of the urban middle class. It is remarkable how this near tidal wave of hedonism could have ushered in a cultural and artistic current of a strength equal to that of classical Japanese arts. Yet like the latter traditions ukiyo-e is inherently Japanese.

Thanks to the art of printing, ukiyo novels and images eventually were to find their way to the citizens. The first publication with woodcut illustrations in the purely Japanese style of the Tosa school was the 1608 edition of the Tales of Ise (Ise-monogatari). These illustrations are attributed to the versatile Honami Koetsu, who designed the calligraphic models for the type, which was partly movable.
This publication became a model for commercial book production in the urban centers. 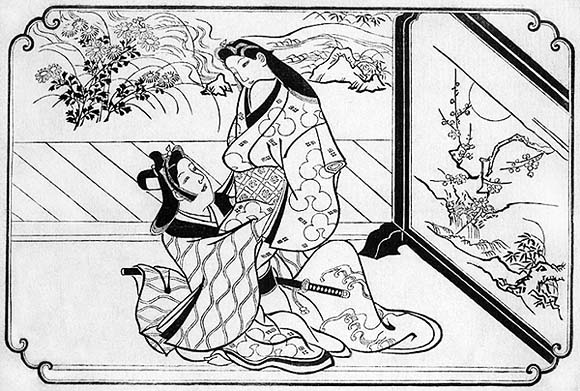 Around the middle of the 17th century, a new ukiyo literature and imagery began to enter the book market. Featuring heroes modeled on city dwellers, this new line celebrated the stylish diversions of urban pleasure districts, the theater, festivals and travels. Guidebooks were also popular, and illustrated what was considered worth seeing in both town and countryside.

Around 1670, there appeared works by the first ukiyo-e master from Edo whose name has been recorded: Hishikawa Moronobu. Moronobu shaped the graphic style of the printed picture. Like almost all other subsequent woodcut artists, he also worked in polychrome painting. Although woodcuts came to have their own distinctive style, it was one nourished by fashion and novelty. Thriving on what was in vogue and on the latest ideas, the woodblock print possessed its own formal aesthetic and had no spiritual relationship with trends in classical painting. From decade to decade, changes in ukiyo-e subjects and drawing styles were largely a function of the changing technology of printing.

Specialisation evolved as one artist devoted himself to pillow pictures, another concentrated on pictures of women and nature while a third satirised fashions and others developed the style of theatre prints..

In Edo, Masanobu and in Kyoto, Sukenobu were using flowing, expressive brushwork in woodcuts to depict not only women of all classes, but also a range of historical and vernacular subjects. Powerful and of great force, these pictures are drawn with tremendous precision and reveal the hands of painters indifferent to the limitations of the new printmaking technique. Between 1711 and 1785 the first perspective pictures (uki-e) were also put on the market by Masanobu, who experimented with Western-style receding perspective in woodblock prints.
In 1741-42, the first two-color prints as single-sheet woodcuts were issued. A technique of rapid printing was developed by the publisher Emiya for use in prints based on several blocks; it employed registration marks (kento) to insure the accuracy ot the final image.

The artistic challenge of the new technology was met initially by Suzuki Harunobu with his calendar prints of 1764-65. Katsukawa Shunsho, a contemporary of Harunobu. became a drawer of woodblock prints only in his later years. From 1767 on, his portraits of actors (nigao-e) were successfully drawn from live models on stage. While in the time of the Torii masters, portraits of actors bore names and descriptions identifying only stereotypical figures, Shunsho and Mori Buncho no longer required such appellations as the actors they portrayed were recognisable in face and figure.

During the 1770s, Isoda Koryusai, a student of Harunobu, initiated an austere type of courtesan portraiture with realistic proportions. In his sequence of young courtesans in designer dresses, he, in fact, established models for fashion in the world of elegance; for it was at this time that even ladies began to dress themselves according to the latest whim in the vogues of the Yoshiwara. 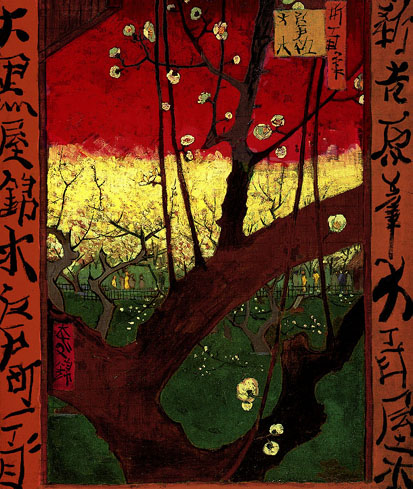 Koryusai portrayed women as well as animals and plants, but only rarely depicted actors. It was with his work that the woodblock print achieved its "classic style," for his figures appear to be alive, despite the fact that, like other woodcut artists of his day, he had probably never engaged in anatomical studies. He used models from the world of the lower middle classes, transposing them into an idealized sphere of aristocratic elegance and beauty.

Toshusai Sharaku's portraits of actors truly succeed, for the first time, in portraying a subject's distinctive inner character. Around the same time, with great formal economy, Utamaro also created intensely expressive portraits of women. The unsurpassed quality of prints from 1780 to 1797 is due, for the most part, to the publisher Tsutaya Jusaburo, who held a magnetic attraction for the outstanding artists of his day. With Utamaro, nature prints came to life again. After 1780, he drew detailed insects, shells and birds for luxury editions of haiku anthologies. Demonstrating a talent for intent observation of nature, his pictures of plants and animals contrast markedly with the conventional designs of Koryusai. Strict anti-luxury laws introduced by the Shogun in 1790, limited previous liberties with regard to playful experimentation and alteration of stylistic conventions. 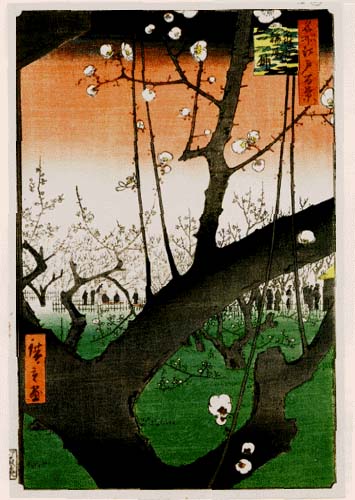 The pivotal point in the art of ukiyo-e came with Katsushika Hokusai, "the one obsessed with painting". He conclusively shifted the emphasis from personal portraiture to a depiction of nature. People in his pictures were unintentionally comic creatures going about their daily business. Hokusai began by creating landscapes in the spirit of ancient Japanese art; he went on to attain a new vision of nature. He was fascinated with European copperplate engraving, a technique which he had encountered in his studies. Through color shading and depth perspective, he strove for a new spatial reality. The results were strange, surrealistic creations of the imagination, which he soon surpassed. When more than sixty years old, Hokusai discovered a new kind of landscape drawing. Around 1831, he began to publish his "Thirty-Six Views of Mount Fuji" (Fugaku sanjurokkei),. his world-famous series of woodcuts. By this point, he was no longer copying but was instead achieving a complete freedom of stylistic means, drawing on Japanese, Chinese and European art. 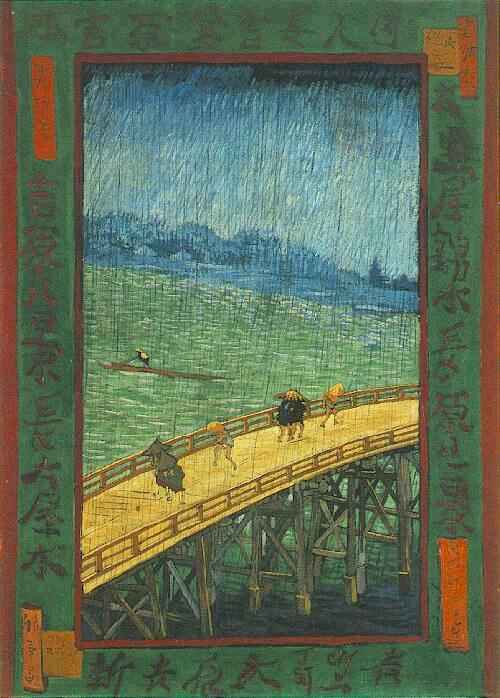 Within a decade, Hokusai was to be surpassed as a landscape painter by Ando Hiroshige, who drew from nature. Following a journey along the Tokaido highway in 1832, Hiroshige portrayed the familiar environment of Edo and of Kamigata to the south. In this series, he revived the familiar territory of travel guides, representing stops along the way by means of painterly woodblock prints. Particular moods of the seasons, weather and time of day lend his landscapes a convincing closeness to nature. Kunisada and Kuniyoshi were his contemporaries in Edo. Kunisada for the most part used a highly conventional style, although his prints find many admirers nowadays, due to their striking posterlike coloring. In a series of surimono from the 1820s, dedicated exclusively to actors of the Ichikawa family, particularly Ichikawa Danjuro VII (1791-1858), Kunisada also demonstrated his capacity for more original designs. On the other hand, his contemporary and classmate, Kuniyoshi, became a great, courageous artist, displaying humor and a quality of generosity throughout his work. His masterful depictions of the hero and landscapes intermingled European and Chinese formal conventions to explore the limits of graphic power, perspective, and the effects of light and shadow. 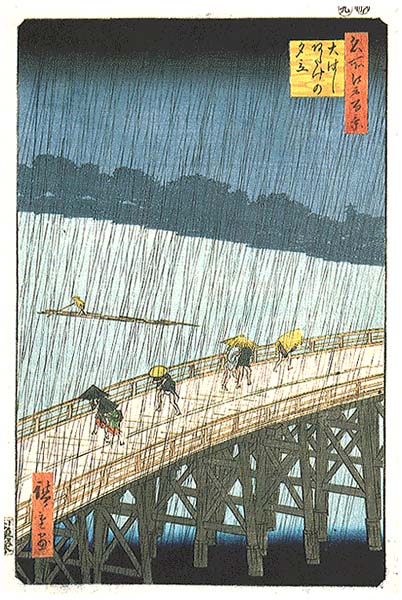 In 1842, as part of the Tempo reforms, pictures of courtesans, geisha and actors were banned, marking the demise of a subject matter that had already fallen from favour. Although both the Yoshiwara and illustrations of the courtesans experienced a revival after the period of the Tempo reforms, neither reached their earlier peaks of refinement. The social and political upheaval that characterised nineteenth-century Japan saw a change in artistic taste and direction that would relegate images of elegant Yoshiwara beauties to the distant past.

During the Kaei era (1848-1854), many foreign ships came to Japan. It was a period of unrest, a state of affairs reflected in the ukiyo-e of the time. Numerous pictures and caricatures were produced which alluded to the current situation in the country. Following the Meiji restoration in 1868, all kinds of cultural imports came to Japan from the West, photography and printing techniques being received with particular enthusiasm. As a result, the art of ukiyo-e went into decline in Japan. Its influence on European art was however dramatic. Van Gogh, for example, paid Hiroshige the compliment of imitation.

Ukiyo-e is an art form with a history spanning more than three centuries. It developed as the middle classes own form of cultural expression, and is unique in the world. In the course of time, the style of ukiyo-e naturally underwent changes, as did the lives of the people with which these woodblock prints were closely linked. But from Japan they have travelled the world; unbeknown to their creators, ukiyo-e have had a profound influence on modern Western painting. With this in mind, we can still appreciate their great vitality today.