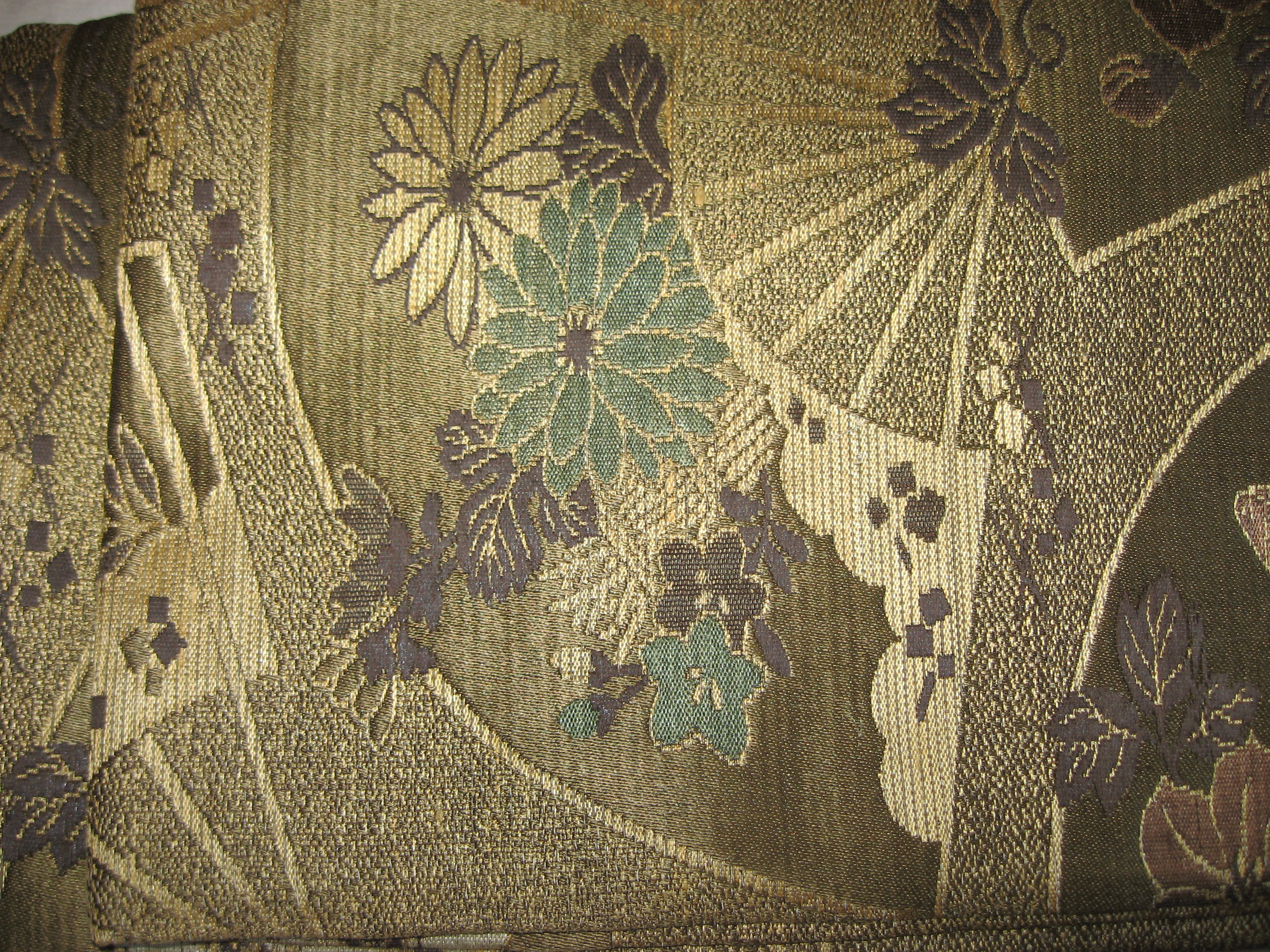 The Japanese Obi, a kimono sash, including the Maru, Fukuro, and the Nagoya Obis are the most important accessory of the Japanese Kimono and may cost more to make than the Kimono in come cases. Some have said that the Nishijin weavers started the craze because of an astounding slump in the demand for their elaborate woven brocades. The restrictions did not allow common people to wear these extravagant and expensive Kimono, but did not forbid them to wear elaborate sashes. With the help of the Kabuki actors, who helped promote the beautiful new sashes, the demand for the expensive brocade weaves continued.
The Japanese Obi come primarily from the Kyoto district known as Nishijin. Nishijin is renowned as the center of the Japanese textile industry since the 15th century. The Obi are sashes that are wrapped around the waist of the kimono and during the early periods (Momoyama and Edo), the obi function was to simply wrap around the kimono wearers waist three or four times only to keep the kimono in place to being the most important kimono accessory. Today, the Obi come in varied style from woven to dyed, single color to beautiful multiple colored works of textile art. The two types of Obi for Men are  the Kaku Obi, (which is stiff) and the Heko Obi (which is soft). The Obi for woman was not a part of their kimono ensemble until the middle of the Edo period. It was then that the Obi attracted the attention of designers and weavers which produced much more obi of varied width color and elaborate designs and dyes.
Japanese Obi may have no pattern at all or may have patterns from the beginning of the Obi to the end. Zentsu Obi is patterned from end to end and may have patterns on both sides or on one side. Rokutsu Obi has only about sixty percent of the Obi with a pattern and only on one side. Typically, the Obi selected to wear with a kimono will depend on the occasion. The brocade tapestry and dyed silk Obi are worn with the most formal kimono. The highest quality brocade made by the Nishijin is known as nishiki translated means beautiful color combination. Nishiki is recognized by the extravagant and beautiful use of gold and silver threads to make gorgeous patterns and designs. Tsuzure another style of obi made in Nishijin which is a tapestry. The Maru Obi, Fukuro Obi, and Nagoya Obi of Nishijin brocade and tapestry are the most desirable of all obi for formal and ceremonial use. Obi which was used for everyday use was made from raw silk and other fabric (cotton or wool).